In collaboration with Indigenous partners we worked to adapt the iHEAL to meet the needs of urban Indigenous women. The adapted intervention, named ‘Reclaiming our Spirits’ by participants, built on lessons learned from the first iHEAL studies, and drew on Indigenous knowledge to address ongoing impacts of colonialism and racism in the lives of Indigenous women and their families. We conducted a small pilot study and then tested the new delivery model in British Columbia (BC).

In 2012, Colleen Varcoe, Annette Browne and Marilyn Ford-Gilboe, working in collaboration with Indigenous partners, began to adapt the iHEAL to be appropriate for use with Indigenous women living in an inner city context. The adapted intervention, named ‘Reclaiming our Spirits’ by women in the pilot for this study, retained the basic structure of the iHEAL but built on the aforementioned lessons learned from the first two feasibility studies. Specifically, Reclaiming Our Spirits drew on Indigenous knowledge and Cree concepts to explicitly integrate attention to the past and ongoing impacts of colonialism and racism in the lives of Indigenous women and their families and to reduce social class and other biases that were subtly operating in some parts of the intervention. This included, for example, challenging the notion of “leaving” an abusive relationship as appropriate for all women, and working to ensure that the iHEAL was appropriate and inclusive for women living in various contexts, including those who were still in a relationship with an abusive partner. In addition to the original 10 iHEAL principles, 10 further principles were developed to specifically address salient issues for Indigenous women, as shown in the graphic below. 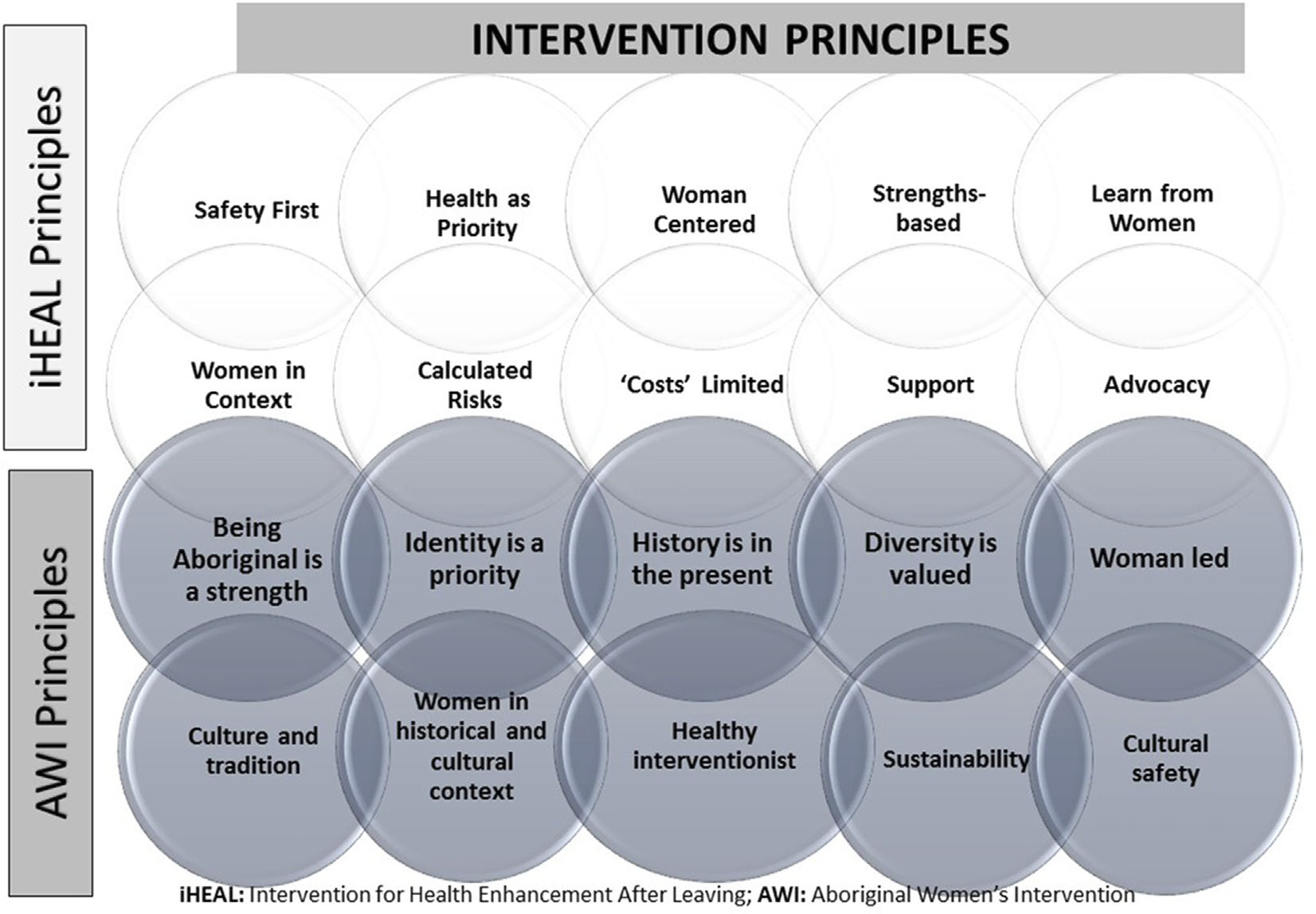 Based on a small pilot study (N=22), the delivery model was tested in British Columbia (BC) was a combination of 1:1 visits between women and nurses, and a weekly circle led by an Indigenous Elder, which incorporated opportunities to participate in cultural teachings. The model shifted from ‘nurse-led’ to ‘woman-led’, and while the concepts and structure of the iHEAL remained important, they were complemented by Indigenous knowledge, and augmented by group delivery, including workshops related to the intervention components (i.e., Managing Basics, Managing Symptoms, Safeguarding, Cautious Connecting, Regenerating Family and Renewing Self).

This version of iHEAL, Reclaiming Our Spirits, was further tested in a before-after study with Indigenous women living in an urban, inner city context in BC 10. The study design was modelled after that used in the Ontario and New Brunswick pilot studies. Results of this study were very similar to the ON and NB pilots, with improvements noted in key outcomes (i.e., mental health, quality of life, chronic pain, self-efficacy and mastery) that were maintained 6 months after the intervention ended.